Photo by Chris Jenson, West Hawaii News
For the seond time in a year, the tsunami sirens went off all over Hawaii.  Lucky I live high above the ocean because I didn't hear them. I don't know if they didn't go off in Waimea this time or what.

Photos by Chris Jensen. West Hawaii News
Anyway, last year we had basically no wave action and no damage. This year we had more -- all on the Kona and Kohala coast.  The Four Seasons and Mauna Lani pool and restaurant areas were flooded. Kona Village Resort by the Four Seasons had units that were lifted off their foundation. The King Kam hotel in Kona was flooded and the water went all the way through the hotel to the end of the parking lot in back.  There was a foot or more of water in the lobby, sidewalks buckled, debris was everywhere and the pier is considered to be destroyed. So no more cruise ships stops here for awhile.

For those familiar with Kona -- the shops across the street from the seawall at the pier were flooded as was the Kona Inn restaurant and Bubba Gumps restaurant.  The palace basement was flooded.  The worst damage to houses was at Kealakekua Bay below Kona where one house was moved off it's foundation and ended up floating in the bay and several others were pretty much destroyed.  And this was all from a relatively minor event -- nothing like the tsunami that hit Japan.  I'm so happy that all the friends I have in Japan have been accounted for and are fine. 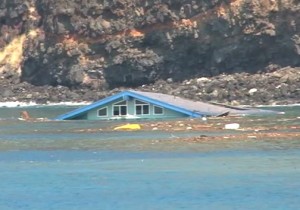 You can see pictures and videos of the Hawaii damage at:  http://www.bigislandvideonews.com/
Be a Fan
Posted by Kathy at 2:18 PM

So glad to hear you are okay been thinking about you. I have a friend visiting Hawaii this week but not sure where exactly she is.

I am glad that you are OK! How are the coral beds? I heard that they were exposed. Was there damage?

i just got a message back from Meg M And she is safe in Tokyo! i had to turn off the news and make art! art heals!! thanks for your coverage.

Glad to hear you are okay Kathy.