Normally I volunteer at the library on Wednesdays but the state of Hawaii has a new Furlough program to save $$. They now have a number of Furlough Fridays where the schools are closed so they can save on teacher salaries and all the associated costs. They also wanted to have Furlough Fridays for the libraries but not on Fridays -- they are on different days depending on the month . Nothing like generating a little confusion...so for January our Furlough Fridays are on Wednesdays. That means I have a whole day free to dye or read or go to the beach or just do nothing --yes! 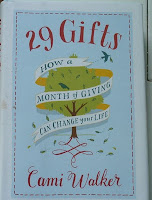 Speaking of reading, I'm in the middle of a book called 29 Gifts: How a Month of Giving Can Change your Life by Cami Walker. It's the story of a young woman diagnosed with MS who was given a prescription by a friend to embrace the process of giving and receiving by giving away 29 gifts in 29 days. These were often simple gifts but the results for her were so amazing that she started creating a worldwide giving movement. It's a quick read but it's very inspiring. I found it at the Borders store in Kona.