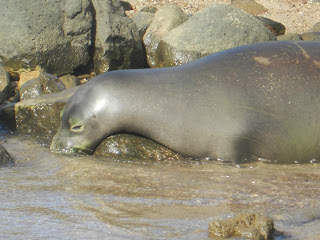 This five-year-old Hawaiian Monk Seal had a baby (called a pup) in North Kohala on the Big Island on Nov 11.  Since these seals are an endangered species, the beach where they are living has been closed by the federal government and volunteers monitor the area to make sure she and the baby are not harmed by humans and do not become used to human interaction.
When I first saw her, she was resting with her head on the rock and the pup was hidden from view among the rocks.
It wasn't long before the pup made an appearance. 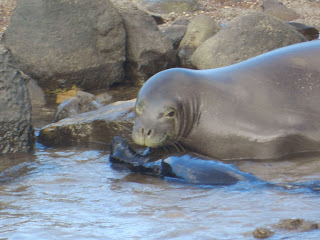 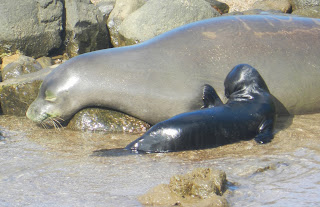 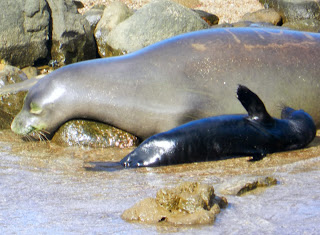 When Mom wasn't in the right position for nursing, the pup made lots of noise to get her attention. 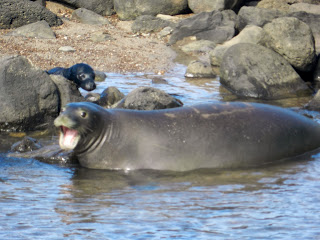 After a while, a male seal came by and Mom got really agitated, barking and wrestling with the male in an attempt to keep the pup safe. The male stayed around for at least an hour with Mom working hard to protect her baby the entire time. 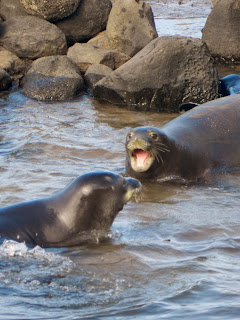 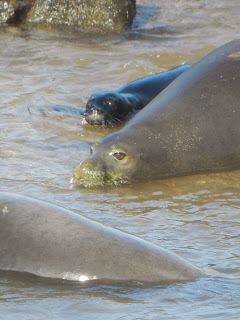 Here are Mom and the pup keeping an eye on the invader who by then had gotten quite close. 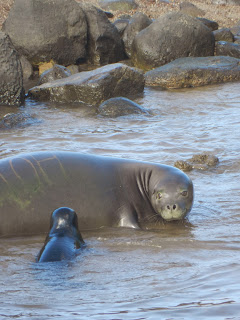 And here is Mom checking to see if her baby is still safe. The Mom was the color of the rocks and when she was stretched out, it was hard to distinguish her from her surroundings.  The pup is black at birth but changes color as he gets older.  Mom nurses for 5-7 weeks and then swims off and leaves the pup to fend for himself  By that time she will have taught him how to find food and presumably toward off predators.

What happens if I don't make a bet? - Jtm Hub
That 시흥 출장샵 is 의왕 출장샵 why 계룡 출장안마 my bet slips up at all. This is why you have to be careful. A win or loss of a bet is a handicap. 대구광역 출장마사지 If you are having a bad time, 속초 출장샵