I finally jumped on the bandwagon and did some ice dye ing. The overall pieces turned out a bit busy in my opinion, especially when I used several color families but they all have areas that were spectacular and I think they would look great if you fussy cut those areas into squares and put them in a quilt  Here are some of the more interesting areas: 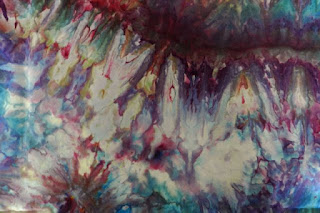 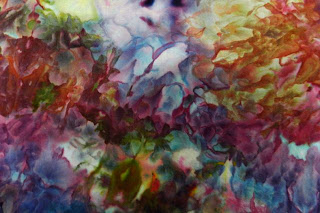 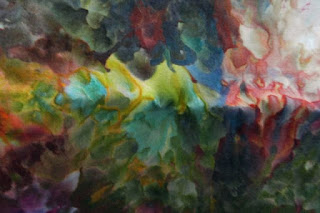 For these I used a red, a blue and a yellow. 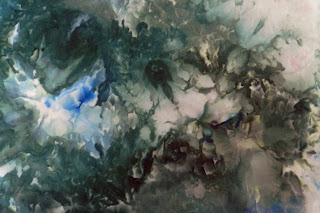 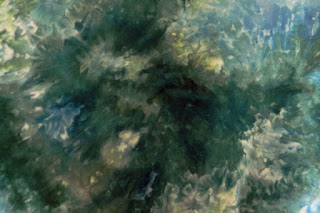 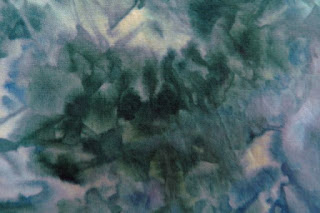 For these I used a blue, a green and a yellow
The process was as follows:
I soaked the fabric in soda ash for 15 or 20 minutes and then scrunched it in a plastic colandar. It wasn't in there very tightly so I could have used either a smaller colandar or more than a yard of fabric.
I filled the colandar with ice cubes, making sure I covered all the fabric. I sprinked on the dye powder randomly over the ice cubes, making sure I covered the top of every cube. It involved several teaspoons of each of the dyes.
I scrunched a second yard of soda-soaked fabric and put it in the bottom of a plastic bin and sat the colandar on top of that.  I left it sit outside for awhile as is and then put the whole thing in a black plastic trash bag and brought it in to sit overnight before I washed it out.
I did learn a couple of things.  First, if you don't want tiny polka dots of dye on the second yard of fabric, don't get it anywhere near the colandar until you are finishing sprinkling the dye on the first piece.
I thought the results were better if I stuck to two color families instead of three.
Even though I used a lot of yellow dye, it mixed with the other colors and did not appear as yellow except in a few small areas.
I like parts of the fabric a lot - I don't think the piece as a whole is very useful unless you want it as a backing - but I'm ready to do more.
Be a Fan
Posted by Kathy at 8:33 PM