Way back in the spring, I realized I had no project to work on with my Hawaiian Quilt group, so I volunteered to make a quilt for a fund-raiser golf tournament that was being held in October.  It seemed like such a long time away that I'd have no problem getting it done. 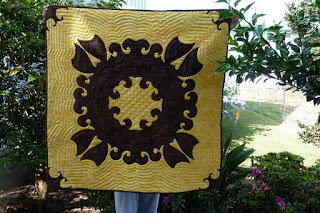 As you can see, I did get it done with a few days to spare.  Some lucky person won this and I understand was thrilled to be able to take home a prize that his wife would enjoy!﻿

The pattern, called Hokule'a came from Vicky Fleming's book "Hawaiian Applique". It is her original design but my applique and quilting. I added the applique in the corner from the fabric that was left over from the center cut. My friend Hanne, who was a volunteer at the tournament and suggested I make the quilt, chose the fabric.

I did echo quilting on the outside background, cross-hatching in the middle and mostly echo on the sails and waves in brown.

Hokule'a is the name of a Polynesian voyaging canoe built in the 1970s in Hawaii. It was used to prove that navigating between the Polynesian islands without modern instruments was possible.  Hokule'a means happy star and is the Hawaiian name for Arcturus, the star that passes directly over the islands.

Just lovely!!! I can imagine how many hours of work are involved. My hands ache just thinking about it. I hope his wife appreciates the work and history in this beautiful piece of art.

Thanks, Barb. I really like to do hand stitching so I try to have something going all the time. But I don't work on it every day, unless I'm trying to make a deadline.