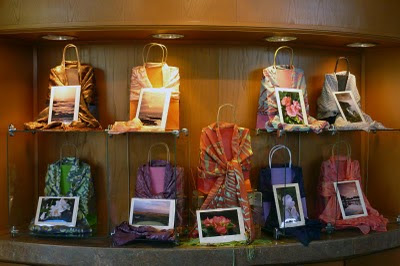 I'm happy to report that my scarves are now available at the Hilton Waikoloa Resort in their Kohala Spa.  This came about after the spa staff saw the scarves at a craft fair about a year ago. So good thing do come to those who wait!  I'm working with two really great women at the Spa and they are doing a wonderful job displaying them in the retail store at the Spa and in the lobby right by the train stop.  The picture is of the display in the lobby.

If you haven't been to the Hilton, then you're probably wondering about the train stop.  The resort is quite spread out and in addition to getting your exercise by walking everywhere, you can also take an airconditioned train or a boat to get around.  One of the stops for both train and boat is of course the lobby, right in front of the scarf display.

In addition to some awesome pools and landscaping they also have a Dolphin Quest program where kids and adults can interact with the dolphins in a man-made lagoon. They have conveniently built an open-air restaurant at the lagoon so you can still watch the action even if you don't want to get up close and personal.

When I dropped off some scarves last week I walked over to the lagoon and had fun watching a Mom and her baby dolphin swimming together in one of the areas of the water that is off-limits to everyone but the crew.  I'll be posting some photos of the duo later on.
Be a Fan
Posted by Kathy at 9:39 PM