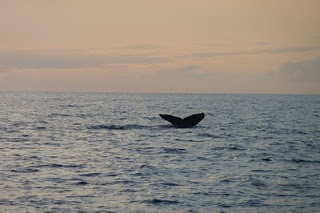 Late last week I went on a whale watch cruise from Kawaihae Harbor on the Kohala Coast.  Whale season is ending so even though this is a great spot to see whales, I didn't have high hopes of seeing much action.  And the beginning of the trip was pretty quiet. The cruises don't normally have to go far to start spotting whales and indeed we did see a few off in the distance but with the boat rocking a bit and the distance I didn't get much of a chance to capture any great shots. Soon after that, however, we came across a group of three -- a mother, baby and a male escort.
There is a law prohibiting boats from getting closer than 100 yards from the whales, but if you are stationary and the whales come closer, that's OK - you don't have to move. And these three decided to move in and have some fun. The little baby kep surfacing and turning aroud and then the Mom would surface followed by the escort.  Eventually each one dove down and showed us the tail, like you see in the picture.
In the two hours we were on out, we saw maybe 12 or 15 whales in small groups and each group came almost up to the boat and put on a show.  It was a great trip and it ended with the beautiful sunsets you see below. 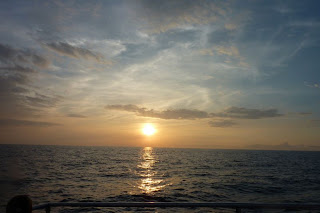 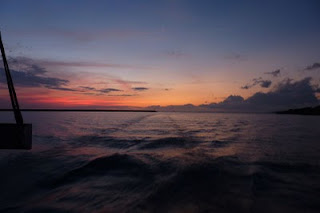 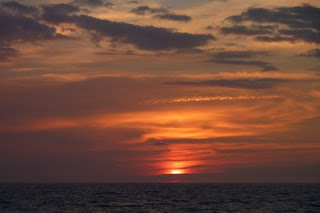 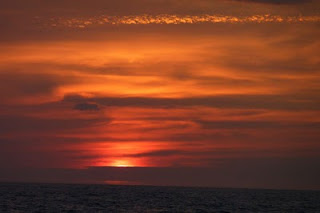